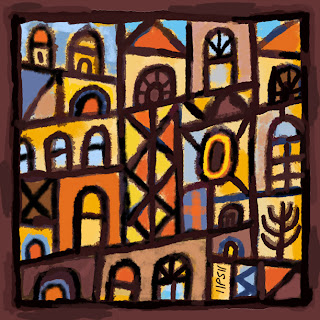 I'm a lucky man. I paint, and I write. The two blessings seldom visit me simultaneously; usually I have to choose between them, like choosing between two lovers. One of those two lovers is of a sentimental and playful disposition, brimming with joy, light, and sweetness; the other is dark, brooding, at times even forbidding. Although she smiles from time to time, her smiles are laced with irony and often with bitterness and despair. She can never stop thinking.

Before I ever started writing I was a visual artist. I say "visual artist," though that's too highfalutin a term for drawing pictures of ships and skyscrapers. It seems to me that I could always draw, from the very beginning, that I never had to learn, not really. I was born (so it seems) with the ability to "see" perspective; although my father tried to explain it to me in technical terms, he didn't have to explain to me what I could very well see with my own eyes, that the rails of the train tracks converged at the horizon, while the tops of the telegraph poles grew shorter. Where other people saw straight lines I saw angles and curves. Not long ago, a well known writer tried to explain to me how, prior to the invention of the camera obscura, the artist Van Dyke could never have "gotten" the perspective of a chandelier in one of his paintings, that such things could only be grasped by the photographically trained eye, which in turn could only exist with the invention of photography or its equivalent. To this I thought (but didn't say) humbug: in Van Dyke's or any other time I could have drawn that chandelier.

I don't mean to brag. My ability to draw is nothing to brag about. It's just something I happened to be born with, the way some people are born double-jointed, or with perfect pitch. That said, I can't deny the great joy that drawing has always given me, how often a pen or pencil and paper have rescued me from boredom and ennui (how would I survive those monthly university department meetings without my doodles?). When traveling, I've considered a sketchbook and watercolors as indispensable as my toilet kit, credit cards, and passport. Don't leave home without them. There were times when, having set out to do a watercolor in the morning, hours later in the middle of the afternoon I'd awaken as if from a trance, my face sunburned, my back sore, having lost myself completely in my painting-in-progress. I count such hours the happiest of my life. The painter in the midst of his work is impervious to suffering. He or she is a truly happy person. I can think of no place I'd rather be than in the realm of constructive oblivion that is painting a picture.

There—in that realm bounded by four points on a single plane—I exert total, dictatorial authority; I'm in charge. I get to achieve something close to perfection, or at least to aim for it. Within that circumscribed realm no one else can tell me what to do, or whether what I'm doing is wrong or right. When it comes to painting, I consider myself above and beyond criticism. When people like my paintings, I'm pleased. On the other hand I couldn't give a damn what the "experts" think. I already can guess that most "real" painters would find my work superficial if not entirely irrelevant, that they would dismiss my paintings as products of a technically proficient amateur, one entirely unversed in the protocols (and politics) of the academy, who doesn't "get it." Of course these days the very notion of an "academy" in art is frowned upon—especially by those who belong to it. Once, at a communal dinner at an artist's colony on an otherwise deserted island in Maine, at a table full of conceptual artists (one of whom, I remember, was constructing a clock from the carcasses of dead lobsters) I dared to invoke Picasso's name, eliciting jeers and head-shakes: did I not know that Picasso was "out"? "He's just a painter," one of the artists remarked disparagingly. Painting was Out; Dada was in. But they didn't belong to any academy.

Never mind. I like to paint and I paint what I like. I paint to give and receive pleasure. When I mix tint into a gesso ground, when I size a board or a canvas, when I paint shape over shape, color next to (or into or over or around) color, when I thicken the paint to a heavy paste, or thin it so it runs and bleeds, when I add sand or ink or sawdust or chalk, when I scrape one color away to reveal traces of the color underneath, when I butt up a delicate line against a heavy form, or a heavy line against a delicate form, when I key the colors so close and low it's as if they are whispering secrets to each other, until I add a splash from beyond their range, a high-octave red or a blazing yellow that adds a piercing scream to all those mumbles and whispers . . .  all done in the spirit of play, the spirit with which children make mud pies or build sandcastles on the beach. There's no pain in painting, not for me. None at all.

There are days when I wonder why, given a choice between painting and writing, do I choose to write? Why would any sane person, given that choice, choose that way? What on earth compels me to forsake the joyful realm of pigments and shapes for the stilted black and white universe of words and so-called "meanings"—when deep down inside all of us know perfectly well that, assuming meaning is to be found anywhere in life, language is surely the last place to look for it.

Why, then, do I bother writing?

The only answer I can give is that I write because writing is so hard, that the challenge of drawing (I use the word advisedly) meaning from words is irresistible precisely because it's impossible, because after all words can only express thoughts, ideas, concepts, symbols—man-made and artificial things. Whereas paint is color; shapes are shapes; lines are lines; textures are textures. They don't stand for anything (they can stand for things, but they don't have to). As much as we take words into our hearts and love them for themselves, for the way they look and sound, in the end they can only stand for things beyond words. They are not the ends but only a means.

But then that 's what makes them so achingly beautiful. Because they are so difficult, so clumsy, such an inconvenient, inefficient means toward expressing feelings and creating beauty, like trying to build the Taj Mahal out of chewing gum and toothpicks. Pigments and grounds were given to us; we dug them out of the ground. Words we had to invent from scratch. As clumsy, inefficient, and inelegant as they are, for better or worse, words are the only medium we can truly claim as our own.

That makes them irresistible.

Great post, I will now read all your books and view your art. I've always been interested in the connection between building, making and writing, art, making and unmaking. The foundations of things. Found your blog after I went to my first creative writing class. We had to pick a picture and think about it. I saw a photo of three men (could have been grandfather, father and son, suits and ties, possibly taken in the fities, hair short, waved and brylcreamed poised over an enormous wine glass filled with what looked like beer with a big frothy top. Immediately I thought of a painting, I couldn't reference it but thought it was called the enlightenment, I remembered it as a globe of light in the centre of the painting, an 18th century representation of an experiment, with generations men, women and children looking on. I'm going to try and find the painting but the nearest I can get online is this:
Experiment on a bird in the Air Pump by Joseph Wright of Derby.
What was really interesting was the way that the oversized wineglass goblet was filled with a dark fluid (the beer), yet in my mond I'd transposed the negative into its opposite, the globe which in the 18th century painting, seemed to be producing light.

So when I read your blog I was really pleased as you're working in this area that I am finding so entrancing. I'll read your books now and hopefully understand more about the connection between art and writing and writing and art.

Submit the first page of a novel or story for a free critique! 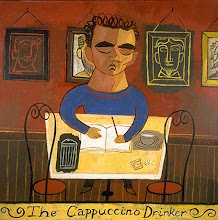 Peter Selgin
Milledgeville, GA, United States
I'm a writer and teacher based in Spuyten Duyvil, Bronx, New York City, soon to be Viebranz Distinguished Visiting Writer at St. Lawrence University. My passions: writing, swimming, teaching. I'm also a twin. When we were kids George and I would harmonize on Beatle songs at the back of Bus #9. The bus was driven by an obese woman named Miss Hatt; appropriate, since the town we grew up in was famous for its hat factories. Cruel children that we were, we invented this bit of doggerel: "Miss Hat is Fat she's a Dirty Rat." I'm here today to apologize for this tiny bit of evil and tell the world that, though she WAS fat, Miss Hatt was NOT a rat, nor was she dirty. She was a fine bus driver and I miss her.